The golden-yellow colour of the baked goods – so characteristic of einkorn – immediately reveals that einkorn must have a high carotenoid content! Or to be more precise, a high level of lutein, the carotenoid that is dominant in 90% to 100% of Triticum species.

In a 2015 study based on 75 samples, scientists from the University of Hohenheim (Stuttgart) investigated the lutein content of whole wheat flours from five Triticum species (J. Agric. Food Chem. 2015, 63, 5061-5071). Einkorn was shown to have a significantly higher content of lutein than emmer, spelt, durum wheat and common wheat. In comparison to "modern" wheat, there is six to ten times more lutein in the ancient wheat einkorn.

Although the lutein content in many vegetables (spinach or cabbage) and egg yolk is many times higher, one must not forget that cereal products are consumed more regularly and in greater quantities. Einkorn can, therefore, be considered a valuable, completely natural source of lutein, especially for vegans. 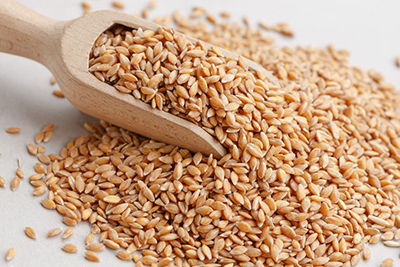 Lutein, which cannot be produced by the body itself, is thought to have various beneficial effects on our health. Above all, it is considered to be a "protective substance" for the eyes, as it is required for the eyes’ yellow spot (the macular), the area specialised in sharp vision. Lutein can help counteract age-related macular degeneration (AMD). Moreover, the eye needs the carotenoid as an antioxidant and as a UV and blue light filter to protect the retina from high-energy radiation.

Lutein also seems to have further positive effects. Carotenoids are antioxidants with potentially anti-inflammatory properties. A study carried out by scientists from Linköping University (Sweden), published in the journal "Atherosclerosis" in 2017, has shown that lutein has the potential to suppress chronic inflammation in patients with coronary heart disease (CHD). This fits in with other findings that demonstrated that lutein had a protective effect on the arteries. The Swedish study also showed that lutein is absorbed and stored in the immune cells of the blood.

Lutein is not the only positive ingredient in einkorn worth mentioning in the context of nutritionally valuable components. In their book "Unterschätze Getreidearten (Neglected Cereals)", Dr. F. Longin and Professor Miedaner from the University of Hohenheim document that einkorn – compared to emmer, spelt and wheat – not only has the highest crude protein content, carotenoids (lutein) and tocols (a precursor of vitamin E), but is also richer in minerals and trace elements, especially calcium, manganese, zinc and selenium.